A native Minnesotan, Amy began her career in the third grade presenting her brilliant rendition of the field mouse in Snow White and the Seven Dwarves. She eventually landed in the theater department at Northwestern University and upon graduation, left her Midwest roots and set up shop in New York City. She worked with the Joseph Papp/Public Theatre, the Atlantic Theatre Company, SITI Company and the Looking Glass Theatre. She also co-founded the Open Door Mime Company. A recent Los Angeles transplant, Southbounders marks Amy’s feature film debut. She is a member of the Hothouse Improv Studio, has performed with several theatre companies around LA and starred in numerous short films. She is currently in development for her next feature project, a political mocku-mentary entitled Get Up, Stand Up. www.amycalepeterson.com. 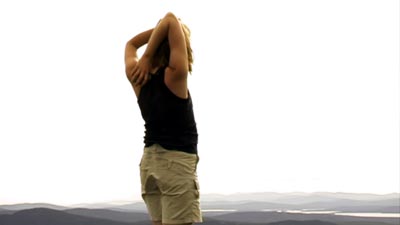 Olivia – Follow Her Journey…
A 19-year-old college student, Olivia had always been in control; her domineering parents wouldn’t accept less. An All-State Soccer player and National Merit Scholar, Olivia’s overachieving spirit guaranteed her a place in Northwestern’s highly selective pre-med program. While at Northwestern, Olivia was an honors student, and also found time to help the athletic department as an assistant trainer. Despite her successes, Olivia felt constricted by the pressures forced on her by both her parents, and herself. After suffering a mental breakdown, she returns home, but she finds no refuge there, as she continues to feel her parent’s relentless pressure and criticism for her failures. Though humbled, Olivia’s indomitable spirit cannot be denied. Unwilling to wallow in her misery, she decides to confront her demons by hiking the Appalachian Trail.

Scott graduated from Northwestern University in Chicago, Illinois. In college, he starred in numerous plays such as Assassins, Present Laughter, and Brighton Beach Memoirs to name a few. He was also in The Mee-ow Show, Northwestern’s premiere sketch comedy and improv troupe. Mee-ow claims such stellar alumni as Julia Louis-Dreyfuss, Dermot Mulroney, and Scott Speiser. Since living in Los Angeles, Scott has performed in several improv and sketch comedy shows at Improv Olympic, The Groundlings, and other theaters around town. He has also written, produced, and directed many of those shows including Starsky & Christ and Christmas in December. He has acted in a large handful of short films, but Southbounders marks Scott’s feature film debut. Later this year, you will be able to see him in his second feature, the horror film, Mangler Reborn. 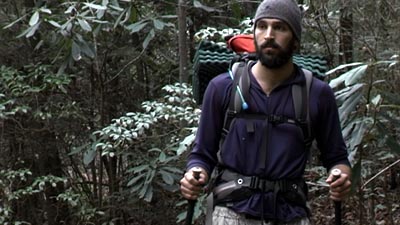 Rollin – A Rollin’ Stone Gathers No Moss…
A listless wanderer, 22-year-old Rollin hasn’t called any place home since leaving his family when he was 17. Highly introverted, Rollin expresses himself through his writing, which he refuses to share with anyone. Life on the Appalachian Trail seems to have opened him up, and he uses the trail registers as an outlet for his creative instincts. Rollin is uncomfortable in his skin. He won’t settle down because he doesn’t want to risk getting hurt. At least on the Trail, he’s free from the world that has threatened him.

After graduating from the University of North Carolina at Chapel Hill with a degree in Dramatic Art and English, Chris took time off from acting, working a variety of jobs from audience development for a professional theater group to video store clerk to factory worker, with many strange stops in-between.

Deciding eventually to give the entertainment industry a more serious attempt, Chris moved to New York City to pursue a stage career. Many off-off-Broadway productions have followed, with companies such as Basic Theater, Inverse Theater Co., Downtown Cabaret Theater, and others. He even branched out into directing and worked as the company text coach for The Women’s Shakespeare Company, a group dedicated to giving female actors equal shot at the great roles of the classic stage.

Focusing mainly on the stage, and especially classical theater, Chris has studied at places such as The Royal Academy of Dramatic Art in London and The Public Theater / NY Shakespeare Festival. A member of Actors Equity Association, this is his first feature film. 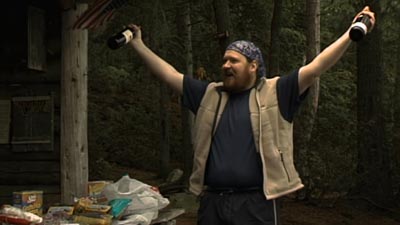 Slackpack – Even The Trees Need Quiet Time…
Slackpack desperately needs approval. He’s accident prone, and bumbling. He’s never really had success at anything in his life. Instead, he’s the butt of countless jokes and the recipient of constant ribbing. He’s uncomfortable in his lifelong role as comic relief. He’s managed to get himself a lady friend, who somehow puts up with his know-it-all personality. They’re taking some “time off” while he attempts the Trail. Slackpack sees the Trail as his chance to finally excel at something… anything.

In Ben Wagner’s latest short “6:00” a cop confronts a gang who done her wrong in a non-stop fight through busted alleys, abandoned houses, and in a speeding car – all in one shot. This visually arresting and technical work epitomizes Wagner’s outlook on storytelling – good stories should challenge, captivate, and entertain. When not writing, producing, or directing films, graphic novels, interactive experiences, or whatever else comes to mind, Wagner is pursuing an MBA at UCLA Anderson business school – because he believes it’s not enough for filmmakers to create stories; they need to know how to find and connect with their audiences. Wagner’s philosophy developed from his experience bringing his first feature, the coming-of-age story Southbounders, to audiences across the world. Wagner is currently producing a series of interactive experiences that build off of his Nicholl Quarterfinalist screenplay, Baja, soon to be released as a graphic novel.

As a graduate of Columbia College’s Film Program, Charlotte Pai worked on a number of independent features before coming to Los Angeles where she continues to freelance as a Producer and Post Supervisor.

When CNN’s “TalkBack Live” took notice of Karcher’s works and featured his experiment “No War, Please,” the series garnered the attention of millions, and as a result of befriending and working with the the staff of Haxan Films and Gearhead Pictures, Karcher’s works expanded to film studios such as Lions Gate, Warner, Paramount, Sony and others as well as an ever-growing list of personal independent projects.

Karcher has also produced and directed “Behind the Scenes at Family Guy” for Fox television and has now grown to full scale film development as producer and co-producer on several independent films, including American House, 524AD, the Joyride, Deleverance and others. He is also currently in production on “The Bloody Benders,” written by Mark A. Patton and slated to be directed by John Carpenter.

Despite the technology of broadcast media, rich content media and motion picture design, Karcher intentionally maintains an antiquarian lifestyle within the rural landscapes of the east coast.  He makes his full-time living as an on-air announcer at WBGO JAZZ 88.3FM, and has been so for 20 years.

Philip attended Phillips Exeter Academy, spending most of his free time in the darkroom. In his junior year he began working for photographer Annie Leibovitz, a job that lasted through his sophomore year of college. His position with Leibovitz led to his next job as an official photographer for the Grateful Dead. After graduating from Exeter, Philip studied film at NYU’s Tisch School of the Arts. In his senior year, he wrote, edited, and directed Looking for Actionman, a fifteen minute comedy which would later win a grant from Martin Scorsese.

In the summer of 2000, he began working as a 2nd unit director and cinematographer with music video director Joseph Kahn. In his two years with Kahn, Philip collaborated on over twenty videos (among them: U2’s Elevation, Moby’s Southside, and Enrique Iglesias’ Hero). Throughout 2002, Philip followed Lenny Kravitz on tour across Europe and North America, shooting a feature documentary/ concert film with Seliger. Philip has since directed Lenny’s music videos supporting his latest album, BAPTISM, including the video for WHERE ARE WE RUNNIN’?

LUKAS ETTLIN – CINEMATOGRAPHER (SUMMER)
Lukas Ettlin studied filmmaking at NYU’s Tisch Film School before establishing himself in Los Angeles as a director of photography. In 2001, he won the award for Outstanding Achievement in Cinematography from the American Society of Cinematographers. Since then he’s been shooting features, commercials, and music videos, including Usher, Marilyn Manson and 50 Cent and the upcoming feature “Life on the Ledge”. Lukas Ettlin is represented by the Mirisch Agency.

LEIF JOHNSON – CINEMATOGRAPHER (FALL)
A graduate of Northwestern University’s film program, Leif has worked as a freelance cameraman and director of photography on multiple documentaries and reality based programs.